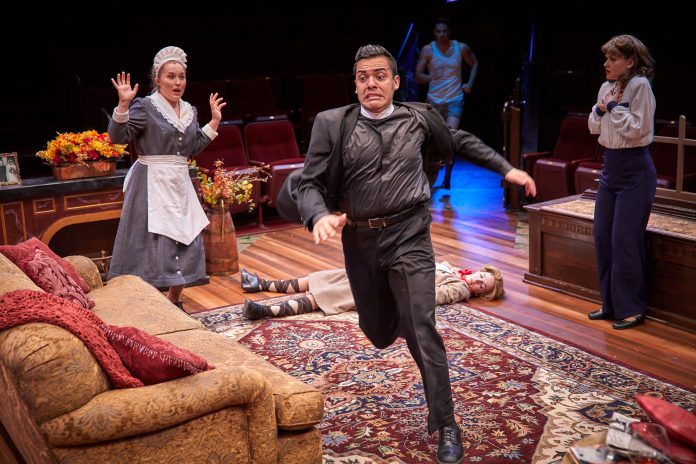 Hale Centre Theatre in Gilbert kicked off the new year with the uproarious comedy See How They Run. The classic Brit-com features over-the- top mistaken identities, an escaped Russian spy, a Cockney maid, a straight-laced bishop, a blonde American actress who is married to a vicar, a snooty parishioner who is a scold, and an old friend of the actress who is now in the army.

Shenanigans and riotous chaos ensue when four of the characters assume clergymen’s attire, including the Russian spy. The arrival of the stately bishop doesn’t calm things down but further leads to mirthful gossip, danger and mishaps, climaxing into an absolute all-out laugh-riot.

Hailed as “an evening of blissful hilarity,” Hale’s production of See How They Run features ariZoni Award winner Vinny Chavez as the army soldier and multiple award winner Cambrian James as director of the show. Other cast members include Jacob Goodman as the vicar, Alexis Harris as his wife, Chuck Green as the spy, Matthew R. Harris as the bishop, and Lindsay Hope as the Cockney maid. The cast is rounded out by Valley actors Justin Howell, Eric Mitchell, and Ami Porter.

See How They Run is based on a book by Philip King, a prolific English playwright and actor, who performed in many of his own plays. The comedy played for many months in London and New York and was adapted into a film comedy that was praised as “a crazy Cockney farce.”

Hale’s production of See How They Run opens on December 30th at 3:00 PM followed by a special ‘New Year’s Eve’ performance at 7:30 PM. The evening performance includes a complimentary dessert bar at intermission, complete with cheesecake and soft drinks. The play will run through February 10, 2018. Tickets are priced at $32 for adults and $20 for youth, and $42 for the late performance on the 30th. Call Hale’s box office at 480-497- 1181 or visit the theatre’s website at www.HaleTheatreArizona.com to buy tickets. Hurry though, as shows are selling out quickly.

A gem of a theater, Hale is located at 50 West Page Avenue in Gilbert’s Heritage District, across the street from the Gilbert Water Tower Park. Several restaurants and ample free parking are located nearby.

Be sure to attend all future shows at the Hale. Next up in 2018 Is Life Could Be a Dream, a jukebox musical romp, performed from mid-January through mid-April on Mondays and Tuesdays. The Broadway smash hit musical No, No, Nanette begins in mid-February and plays through the end of March. The Importance of Being Earnest, the hilarious satire on Victorian manners by Oscar Wilde, appears from April 5th through May 12th, 2018. Big Fish, an entertaining big fish story set to music, is next from mid-May through the end of June. Sister Act, the uproarious musical comedy about a disco queen who takes refuge in a convent from her mobster boyfriend, concludes Hale’s 15th season. Sister Act plays from July 6th through August 18th, 2018. 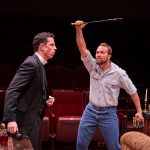