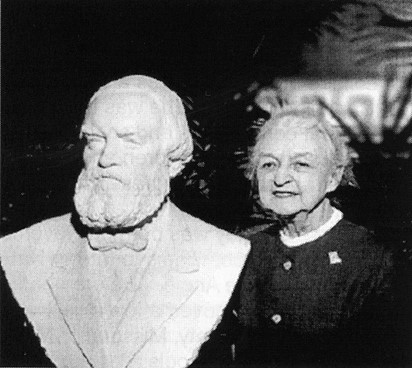 Originally published August 20, 2010 – The old adage paraphrased “behind every great man is an even greater woman” certainly applies to today’s column. Last week’s account of John R. Murdock, a long-forgotten Tempean who once was a leader of Arizona’s Congressional delegation was only half of the story.

This week’s you’re introduced to the other half – Myrtle Cheney Murdock who has more name recognition today than her husband. Myrtle Cheney was born in 1885 in Nauvoo, Illinois just seven months after John. Growing up the pair led independent parallel lives centered on education. Myrtle began her teaching career at age 15.

The two met at the First District Normal School, a Kirksville, Missouri teacher’s college both were attending. Apparently love at first sight, the couple wed shortly after in 1906 while Myrtle was teaching in the Telequah Indian Territory in Oklahoma.

In 1910 John and Myrtle were back in Missouri teaching together in Ridgeway. John was hired away by the Tempe Normal School in 1914. Even though raising two sons and a daughter, Myrtle wanted a master’s degree.

Since John’s school didn’t have a program, Myrtle was forced to attend the competing University of Arizona – which meant leaving all but the youngest child back in Tempe.

After graduating in 1927, Myrtle returned to their Tempe home at 1102 Van Ness Avenue and was hired by Phoenix College.

Regrettably the Murdock residence has long-since been demolished after ASU’s acquisition of the property.

The couple’s life took a dramatic turn in 1936 when John became the second Tempean elected to Congress. They moved to Washington, D.C.

During their time in the Capitol, Myrtle, at age 55, went on to earn her doctor of Education at George Washington University – thereby becoming, according to historian Ken Reid, “…the first congressional wife to earn a doctorate.”

While working for her husband in the Capitol building, Myrtle found herself drawn to the extraordinary frescoes adorning the walls and dome of the Rotunda. She learned they were all the work of Italian-born painter Constantino Brumidi who spent a quarter-of-a-century laboring on the elaborate decorations.

Old age and frailty ultimately forced Brumidi to retire at age 72 – his work unfinished.  The name of this exceptional artist who died shortly after was soon forgotten. That is until Myrtle completed a 14-year quest – resurrecting the story of this remarkable artist.

She even located Brumidi’s obscure, unmarked grave in Washington’s Glenwood Cemetery. Her research culminated in an epic biography – Constantino Brumidi, Michelangelo of the United States Capitol published in 1955.

Myrtle survived husband John by eight years, passing away in 1980 at age 94 at her son’s home in Media, Pennsylvania – leaving an extraordinary legacy of a pioneering woman.

£  Correction to last week’s column: Thanks to Peggy Bryant, longtime Tempe Daily News editor and columnist for reminding me that John McCain was living in Tempe when he was first elected to Congress bring the total to four.