For the first time in history, every New York Fashion Week presentation this year  featured at least one model of color.

More specifically, the Spring 2018 lineup that premiered in September was the most racially diverse season that NYFW has had yet, as each show featured two models of color. The Fall 2017 season, which was showcased in February, was the first wherein every runway had featured at least one, according to the Fashion Spot’s biannual diversity report.

“Certainly in the last 10 years, the question of diversity not only entered the spotlight, but became a sustained topic of conversation,” said Washington Post fashion critic Robin Givhan. “There’s been undeniable progress.”

The report examined 94 major New York shows and tallied 2,601 runway appearances, finding  that 63.1 percent of all model castings were of white ethnicity, while the remaining 36.9 percent were nonwhite. 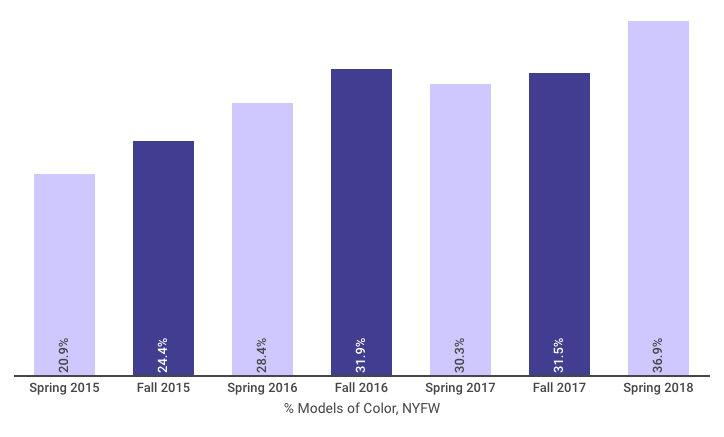 “The statistics show it, but you can see it anecdotally, which in some ways is even more important,” said fashion critic Givhan. “It’s one thing to quote statistics that include a look at minor shows, mass-market brands and barely known design houses. It’s something else when you can recall the diverse cast at major, influential shows, such as Calvin Klein or Marc Jacobs.”

Jacobs was among the few designers to cast and showcase primarily women of color in his shows this year. This is noteworthy, as he, along with Raf Simons, is deemed as one of the leaders when it comes to New York Fashion Week.

“Diversity in fashion helps to intensify the shows and the industry,” said Alexa Guy, a fashion ambassador for Phoenix Fashion Week. “With every different model, the spectrum of opportunity expands and being different isn’t looked at as a bad thing.”

But diversity in fashion has been a topic of conversation outside of New York, too. According to the report, 241 major runway shows that stretched from New York, to London, Paris and Milan were made up of 27.9 percent models of color—a noticeable increase from the previous two seasons’ 24.7 and 22.4 percents.

But while progress has been made, some claim that there is still a long way to go. Londone Myers, a black model who walked in Paris Fashion Week, took a stance against racism  in the fashion and beauty industry on social media earlier this week. Explaining that while inclusion has been more heavily promoted this year, that attitude hasn’t necessarily been adopted backstage.

“I don’t need special treatment from anyone. What I need is for hairstylists to learn how to do black hair,” said Myers in her Instagram caption. She expanded upon her experience, stating that she was ignored backstage during a show and that hairstylists didn’t know how to work with her hair.

“Fashion is a staple in society and culture” said fashion ambassador Alexa Guy, “ if it isn’t diverse, then it’s not fair to those who are responsible for its growth. The industry wouldn’t be what it is if people didn’t buy the clothes and all types of people do, so it only makes sense that all be represented.”