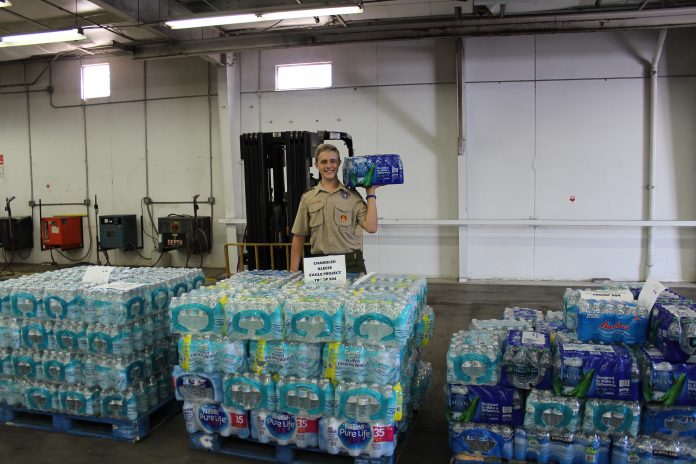 When seventeen-year-old Boy Scout Chandler Kleese of Mesa launched his Eagle Scout Project in mid-August to collect water for United Food Bank and the Mesa Hydration Donation Campaign, he set a goal of 20 pallets of water. By early September, he had already passed the mark by 7 pallets! He had no way of knowing that he was really just getting started!

With help from a grant from his local Walmart, Kleese collected 41 pallets of bottled water, equivalent to 86,000 bottles and 41 tons of water! That’s more than double his starting goal and is the largest water donation and Eagle Project United Food Bank, which serves the East Valley and eastern portion of Arizona, has ever received. The water will be distributed through United Food Bank to numerous agencies in the Valley, including including A New Leaf-East Valley Men’s Center, Paz de Cristo and Mesa United Way.

Kleese started in scouting nine years ago as an eight-year-old. He helped both of his older brothers with their Eagle Scout projects, so he learned what to do to make his project a success. His parents saw a story on the news about United Food Bank’s Hydration Donation campaign. “We decided that would be a good Eagle Scout project for me to do,” notes Kleese.

After meeting with United Food Bank to approve his project, Kleese wrote to several WalMart store managers asking if he could have volunteers from his scout troop stand outside their store front with a table requesting donations of a case of water or $1. “We had quite a few people buy more than one case of water and many donated more than $1,” Kleese notes.

When all was said and done, Walmart customers donated five pallets of water and more than $2,000 in cash. He was able to purchase 18 pallets of water with those funds. Kleese also sent around a sign-up sheet at his church. Two Walmart stores approved grants for $1,000 each.

“Knowing that I completed my goal and exceed it by 21 more pallets is definitely an awesome feeling for me,” says Kleese. “That’s two tractor trailers full of water!”

Giving Tuesday: 6 Local Causes to Put Your Money Where Your Heart Is