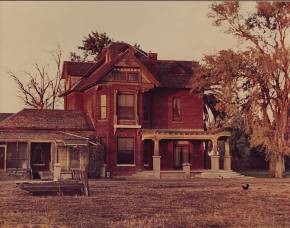 Originally published March 12, 2010 – Last week’s column began with the question “What do the Petersen House and fine art have in common?”

Before we had time to make the connection we ran out of space.

If you recall, we were talking about Tom Harter, an extraordinary artist and art teacher for nearly four decades at Arizona State Teachers College, now ASU.

We learned that Harter after his first visit to his wife’s hometown of Tempe in 1935 fell in love with the light and textures offered within the Western landscape.

From his arrival in Tempe Tom Harter was captivated by the two-story Petersen farm house about 3½ miles from the center of town. He visited it frequently to capture the quaint home and grounds on canvas.

He got to know the home’s owner Una Belle Decker quite well. Decker’s husband Reverend Edwin Decker, Niels Petersen’s nephew inherited the home in 1927 upon the death of Petersen’s wife Susanna.

Edwin died in 1948. Three years later the aging Una Belle decided to move into town. Yes, the corner of Priest and Southern was still out in the country.

Decker knew the perfect tenants for the house ─ Tom Harter and his family.

As Harter would later recall “In November of 1951 we moved to a Victorian mansion in the country where my classes and I had ten acres of landscape subjects and a long view. This resulted in perhaps the most productive period in my own painting.”

For the next 17 years, the Petersen House was not only home to Tom, Helen and daughters Susan and Eduarda, but a living classroom for Harter’s students.

According to Josh Roffler, curator of a Tom Harter retrospective at the newly reopened Tempe History Museum: “The old Victorian mansion and its surrounding outbuildings, trees and farmland were among his favorite subjects to paint. In the process, he visually documented the look and spirit of rural Tempe.”

Susan who was 18 when the family moved into the house often sat in with her sister on her father’s classes ─ probably the inspiration for Susan to cultivate her own career as an accomplished artist and like her father teacher at ASU.

During the time the Harter’s lived in the house, the population increased nearly eight-fold from less than 8000 to more than 60,000. By the mid-1960’s urbanism was creeping into the delightful pastoral setting so loved by Harter.

What was once a country setting was now a quaint reminder of an earlier era in the heart of the city.

In 1965 Helen Harter lamented “Civilization is really encroaching; it (the Petersen House) was practically out in the country when we first moved in.”

Up until the time the Harter’s left the aging and deteriorating home in 1968 it provided limitless inspiration for Harter and his students.

You can see many Harter and his student’s interpretations of the house and grounds at the Harter exhibition at the Tempe History Museum.