In a state with a history of controversial immigration laws, a population of Latinos who are legally required to comply with law enforcement’s “reasonable attempts” to determine immigration status, are helping to drive the economy.

In terms of their spending power and tax revenue contributions, Latinos, both native and foreign-born, are major contributors to the health of the American economy, according to a study by Partnership for a New American Economy.

James Garcia, director of communication and public policy at the Arizona Hispanic Chamber of Commerce said that with population growth comes more spending.

Latinos make up more than 17 percent of the United States population and over 30 percent of Arizona’s population, according to the 2015 U.S. Census.

“It’s important for all Arizonans, and perhaps especially its leaders, to really have an understanding of the economic impact of this community (Latinos),” Garcia said. “Otherwise, the future of Arizona will be in peril simply because you’re missing out on such a large proportion of the population.”

According to the study, Latinos account for more than $600 billion or almost 10 percent of the country’s spending power– that’s more than the annual revenue of Walmart, which is about $476 billion.

Garcia said he believes this growth may be explained by a greater portion of the Hispanic community becoming better educated. 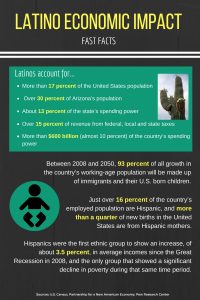 Latinos also account for about 13 percent of the state’s spending power and over 15 percent of revenue from federal, local and state taxes, according to the study.

The economic impact of the Latino community will only continue to grow as Latino children grow-up and become the country’s main workforce, Garcia predicted.

Between 2008 and 2050, 93 percent of all growth in the country’s working-age population will be made up of immigrants and their U.S. born children, according to a study by Pew Research Center.

Just over 16 percent of the country’s employed population are Hispanic, and more than a quarter of new births in the United States are from Hispanic mothers, according to the study.

Yet, Garcia said the average American isn’t aware of the scope of Latinos’ economic impact, mainly due to willful ignorance.

He said there is a portion of the American population who feel these people simply don’t deserve to be here, and he has experienced discrimination himself.

“Sometimes educating yourself is as simple as having a conversation with someone from a community that you are not a part of,” Garcia said.