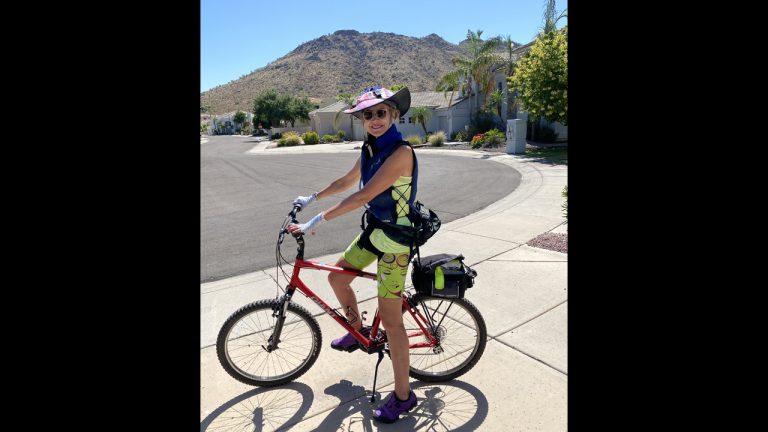 In July 2010, Karen Janitell was enjoying a thriving career at Western International University. She ate well, exercised often, had a fulfilling career and family. What she didn’t know was a cancer diagnosis was about to change everything.

“I had a very busy and productive life,” Janitell says. “The thought of cancer never, ever even came into my head.”

Breast cancer is considered one of the most common cancer diagnosed in American women according to the American Cancer Society, with the disease occurring in 1 out of every 8 women.

For Janitell, the diagnosis was surreal. Because of her active, healthy lifestyle, she says she thought there was a mistake. She recalls telling the doctor they must have confused her with someone else.

“Being the kind of person I am, it still never really hit me,” she shares. “There was no crying, I just felt like okay we will get it out then, let’s keep going.”

Initially diagnosed with stage 0, Janitell continued her normal work and life activities as she sought treatment for what she thought was non-invasive breast cancer. Meanwhile, her sister was urging her to get a second opinion. An action which likely saved Janitell’s life.

Two months after her initial diagnosis, Janitell arrived in Texas for an appointment at the University of Texas MD Anderson Cancer Center where they immediately performed a biopsy. In an afternoon, stage 0 cancer became stage IIIC. An invasive cancer they found in one breast and spreading into her lymph nodes.

The first surgery, a double mastectomy, would be the first of 17 cancer related surgeries Janitell has endured in the past 10 years. Including an 11 ½ hour surgery in 2012 to remove a desmoid tumor that was aggressively spreading through the tissue in her chest.

“I think that hit me way harder because I thought I was on the other side of this,” she says.

Janitell also underwent 37 radiation sessions and three rounds of chemotherapy over the course of her cancer journey. She recalls chemo being hard on her. From sickness to being covered in hives, it was a necessary evil in her recovery, but it also led to the moment she says she realized she would have to step away from her career.

“I had worked all day and when I left, I got to my car,” she says. “I sat there for almost two hours because I did not have enough energy to drive home, I was too sick.”

According to her, the hardest thing emotionally was the recovery time after each surgery. It was so isolating; she describes it as feeling like the rest of the world was moving on without her. Something she combated by relying on her history of faith, loved ones and lots of exercise when it was allowed. One day, a friend of Janitell’s asked her to envision what she saw for the future.

“I envisioned I was sitting on the back porch with my grandbaby swinging,” she shares. Less than a week later, she received the news that her daughter, Jennessa, was pregnant.

Janitell recalls being discouraged with her recovery when she would look in the mirror, describing the weight loss in her face and arms, feeling stronger while still looking ill.

“You look in a mirror and you don’t see yourself anymore and it’s scary,” she says.

She lost her hair multiple times and recalls it being different every time it grew back. And when the weight didn’t return to her face, she looked into cosmetic procedures and fillers to help her feel like herself again.

Ten years in, Janitell is still dealing with the long-term effects and side effects of her diagnosis. But she shares the importance of surrounding yourself with supportive people, eliminating negative influences and relying on her faith.

She considers the support network she has built as one of her biggest wins, along with each time she is given the all clear after a computerized tomography (CT) scan or checkup.

Another win for Janitell was the ability to return to work. Five years ago, she joined her daughter in opening Advanced Image Med Spa, where she runs every non-medical aspect of the office. She shares the satisfaction she gets from being able to put her knowledge to use while helping patients of the med spa find confidence in themselves regardless of what brought them in.

“If you can help other people by sharing your stories and the way you looked and felt, those are huge wins,” she says. It isn’t vanity to want to look like your old self it is sanity.

“When you have cancer, everything is urgent,” Janitell says.

She encourages anyone who receives a cancer diagnosis to get a second opinion immediately, citing her own situation and sharing that she has no way of knowing how far the disease progressed in the two months between diagnosis and second opinion.

According to Janitell, the internet is a rabbit hole you don’t want to go down if you can avoid it. She says there’s too much temptation to learn every outcome, side effect and statistic.

“You are not a statistic, you cannot treat yourself like you are,” she says.

Her last piece of advice is to make yourself to do things you don’t think you can do, even when they are hard. For her, that was taking a vacation with her family and treasuring the memories they made even if it was physically hard on her. Getting your life back, even little pieces of it, helps heal you both mentally and physically.

“Try to do the things that are important to you, the things you love or bring you joy, even if you don’t think you can do them,” she shares. “Whatever you accomplish, even if it isn’t everything you wanted, be grateful and know you are moving towards your full life. Embrace every accomplishment and it will give you the faith you need to keep healing.”