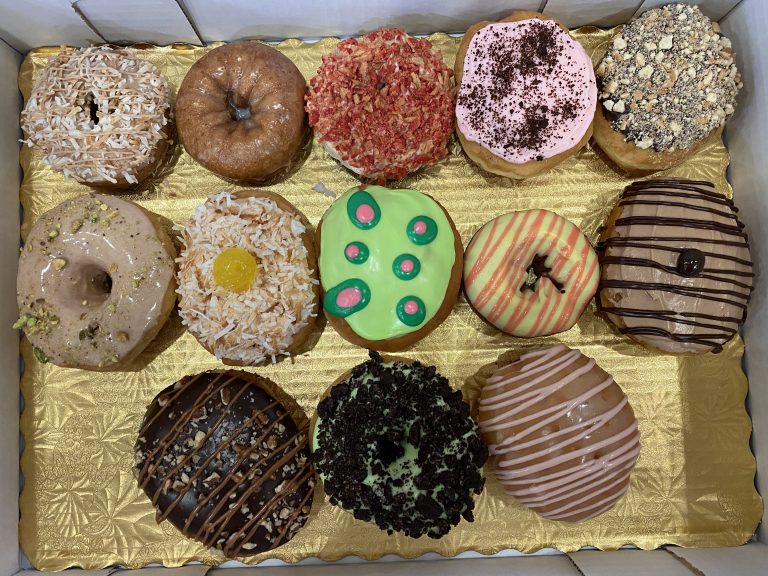 The votes are tallied, and five kids, five grown-ups, and three Bashas’ Family of Stores members (employees) are finalists in this year’s Donut Flavor Craze Contest.

The sixth-annual contest invited Arizona kids and grown-ups to draw some inspiration from their previous travels to dream up the best new flavor for the hometown grocer’s donut cases. The donut flavor finalists did not disappoint, with ideas themed around everything from a Greek Baklava donut and a Peru-inspired, Bavarian-cream-filled donut to a Limoncello-flavored cake donut, an Arizona Prickly Pear donut, and an Aloha donut with pineapple and coconut flavors.

Judges carefully weighed creativity, flavor combination, and individuality to choose the finalists based on a 100-word description of their best donut idea, including the proposed name, key ingredients, and why the donut is a sweet treat or guilty pleasure. Entries spanned three categories this year: kids ages 8-17, adults 18 and older, and Bashas’ Family of Stores members (employees).

The following five kids were named finalists for their flavor submissions:

The following five adults were named finalists for their flavor submissions:

Baklava: Explore Greece with a Baklava donut made with cinnamon, dipped in a honey glaze, and topped with chopped pistachios. (Phoenix resident Heather H.)

Rosquilla de Desierta: A sweet donut with prickly pear injected into the center, topped off with a drizzle of honey that has subtle notes of mesquite. (Tucson resident Christine C.)

Limoncello: A fruity donut inspired by the coast of Italy, this Limoncello-flavored cake donut is topped with raspberry icing. (Gilbert resident Leslie P.)

Livin’ La Vida Mocha: A donut with a whipped cream center with notes of mocha, sprinkled with crushed espresso beans, and topped with a chocolate drizzle. (Mesa resident Brian V.)

The following three Bashas’ Family of Stores members (employees) were named finalists for their flavor submissions:

Delirium: A Bavarian-cream-filled donut inspired by Peru, topped with chocolate icing, crushed pecans, and caramel drizzle. (Mesa resident Kristine Pearce, who works at the Bashas’ supermarket at Baseline and Crismon Roads in Mesa)

Berry Red Chili Razz: A sweet-with-a–little-heat donut that is raspberry filled and glazed with a light Sriracha/Raspberry preserve. (Chandler resident Krista Levine, who works at Bashas’ Family of Stores’ corporate office in Chandler)

Earthquake: A donut with minty green icing and Oreo crumbs on top. (Gilbert resident An Ngo, who works at the Bashas’ supermarket at 48th Street and Warner Road in Ahwatukee)

Three winning donut flavors (one youth, one adult, one member/employee) will be selected by a panel of local celebrity judges just in time for National Donut Day next Friday, June 4. The winning donuts will be available in Bashas’ bakery cases across the state for a limited time, during the month of June, joining the grocer’s additional 59 donut flavors and varieties that are available year-round. Bashas’ is known for the made-from-scratch bakery treats that it makes each morning, including donuts, fritters, croissants, Danishes, brownies, frosted cookies, cakes, cupcakes, and more.

In addition to having their winning donuts featured in Bashas’ bakery departments across the state, the three winners will be named Bashas’ Official Bashas’ Donut Ambassadors for 2021, and receive $500 worth of prizes, including a Bashas’ grocery gift card, baking/cooking gadgets, family-fun activities, and one dozen donuts every month for a year.

Each winner will receive $500 worth of prizes including a Bashas’ grocery gift card, baking/cooking gadgets, family-fun activities, and one dozen donuts every month for a year.

National Donut Day was originally established to honor The Salvation Army’s service to soldiers during World War I. Around 250 volunteers traveled overseas to provide emotional and spiritual support, sweet treats, clothes, and supplies to troops. These women, known as “Donut Lassies,” made and hand-delivered donuts to the front lines and are often credited with popularizing the donut in the United States when the troops returned home from war. In honor of this holiday, Bashas’ supermarkets will donate 10% of all donut sales on Friday, June 4 to The Salvation Army.

Bashas’ Family of Stores – the family-owned grocer that operates Food City, AJ’s Fine Foods, Eddie’s Country Store, and both Bashas’ and Bashas’ Diné supermarkets – is an Arizona-based company founded by brothers Ike and Eddie Basha, Sr. With more than 100 grocery stores, it is one of the largest employers in the state and one of the Best Places to Work in Arizona. Since the company’s inception in 1932, Bashas’ has given back more than $100 million to the communities it serves. For more information, visit www.bashas.com.