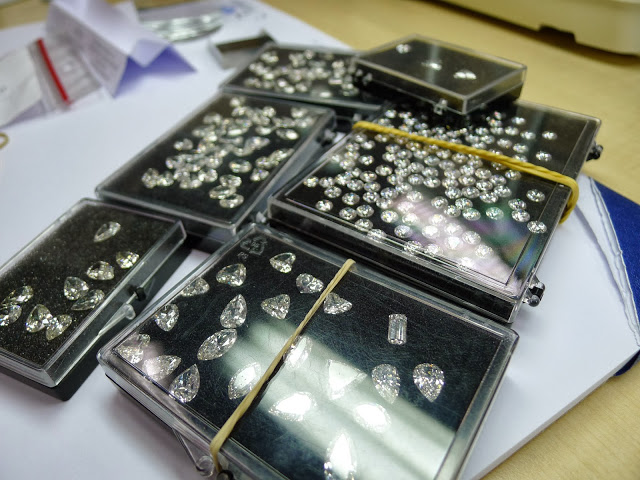 Whitestone REIT announced that Chandler, Arizona business owners Connie and Rich Finkbeiner have been granted an exclusive opportunity to travel to Antwerp, Belgium in early October to select from the best diamonds in the world for their customers. The Finkbeiner’s own Connie’s Jewelry Gallery at the Shops at Pecos Ranch at Germann and Dobson roads in Chandler, Arizona and are known for offering diamonds, precious gems and jewelry unlike any in the region.

Normally, independent jewelry stores aren’t allowed to buy in Antwerp, but the couple recently joined the Independent Jewelers Organization (IJO) with diamond offices in Antwerp. This allows the Finkbeiners to buy directly from Antwerp diamond cutters who are reported to offer the largest selection in the world, the lowest prices and perhaps most importantly, seen as true artisans whose diamond cutting skills are unparalleled.
“Two-thirds of the world’s diamonds are traded in Antwerp, so the selection is tremendous,” stated Connie Finkbeiner. “As we look for the perfect diamond for our client’s loved ones, we’ll be able to hand select the most exquisite diamonds straight from the source, save locals money and create a piece that is truly one-of-a-kind.”
Previously Antwerp diamond offices were only accessible to diamond wholesalers – the middle men – and independent retail jewelers like the Finkbeiners weren’t allowed access. Then Bill Roberts, founder of IJO, made arrangements for a few offices to admit IJO members in the ‘80s.
“Some people think one can look at a piece of paper on the internet and select a stone, but there’s no way to tell if that stone has fire, has life. I need it to say something to me,” said Rich Finkbeiner. “If I’m going to put my name and my reputation behind a diamond, I’m going to be certain it’s the quality for which Connie’s Jewelry Gallery is known, and buying directly from Antwerp allows me to do that.”
Arizonans wanting the perfect diamond for a special occasion should contact the Finkbeiner’s at Connie’s Jewelry Gallery at 480-883-3320 in the next two weeks, so they’ll be able to search for an impeccable gem.
For more information on Connie’s Jewelry Gallery, visit their store at 1900 W. Germann Road in Chandler or online at: https://www.conniesjewelrygalleryandclockshop.com/