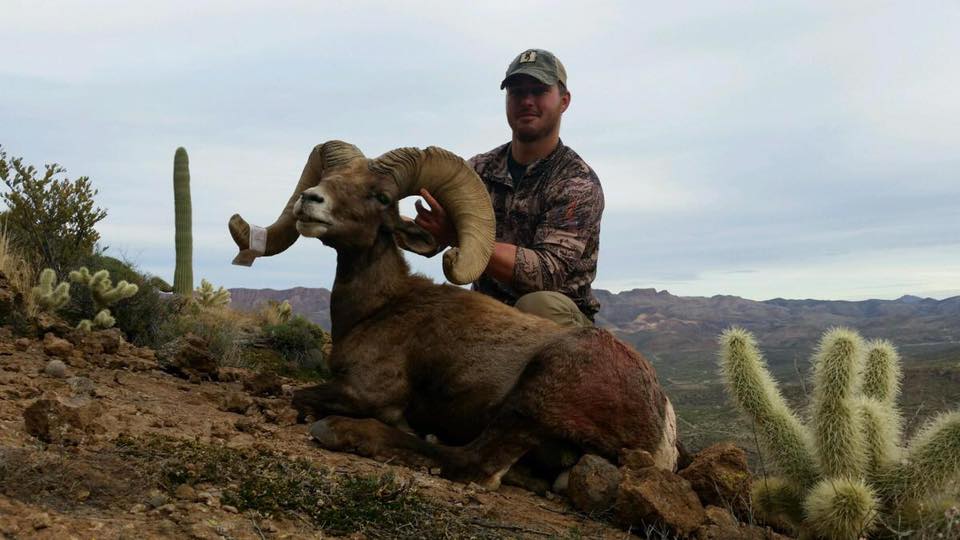 United States Marine Corps Corporal Neil Schalk had a holiday experience he’ll never forget, thanks to the Arizona Elk Society’s Hunts for Heroes Program https://www.arizonaelksociety.org/. The program, a partnership between the Arizona Elk Society (AES) and Arizona Game and Fish, connects veterans with disabilities with Arizona hunting outfitters to get veterans out of their routine and enjoying the outdoors.

On December 27, Program Director Dave Holbrook received a donated Arizona Desert Sheep Tag. Time was a factor since the season ended on Dec. 31, meaning the Arizona Elk Society and volunteers would have to organize the hunt immediately. Holbrook reached out to volunteers who dropped everything during the busy holiday season to volunteer less than 12 hours after the initial request. Additionally, United States Marine Corps Corporal Neil Schalk was contacted to be a participant in Hunts for Heroes.

Schalk, who lives in Williams, Arizona, carefully contemplated the opportunity to participate in a hunt using a donated Arizona desert sheep tag despite the holiday season and short time frame.

“After considering the magnitude of an Arizona sheep tag and a conversation with Hunts for Heroes coordinator Tom Wagner, we decided to give it a go,” Schalk said.

Schalk met up with Wagner the next day and they headed to Superior, Arizona. The two met up with seven volunteers from CouesWhitetail.com, a local online forum created by a wildlife biologist for hunters and wildlife conservationists. Forum members rallied equipment and resources to participate on such short notice. They met at the trailhead and then glassed the mountain looking for sheep. After spotting two mature rams, Schalk and three volunteers headed up Picketpost Mountain.

“The rams had spotted us and were looking straight down at us,” Schalk said. “Although the wind was in our favor, we decided trying to get closer would probably send them over the top. After a few minutes of fumbling around trying to get a solid rest, we were able to take a solid shot. One shot and the ram rolled downhill out of sight. It took us about 45 minutes to cover those 500 yards, and I was speechless when we walked up on the monster sheep.”

They took photos, quartered the ram and headed back down the mountain, the way lighted by headlamps.

Schalk said he is still in disbelief of the coordination, volunteers and harvesting of a trophy desert bighorn.

“I cannot thank the volunteers from CouesWhitetail.com and Arizona Elk Society’s Hunts for Heroes program enough,” Schalk said. “It was an unbelievable team effort and I truly appreciate the compassion and footwork that made this hunt possible. It made me feel greatly appreciated. Many combat wounded veterans say the hardest thing isn’t the combat tour itself, but the transition back to ‘normal’ life.  For someone like myself, this hunt has proven to be a great healing experience, and a great step toward normalization.”

Schalk joins a growing list of veterans helped by the program for veterans with a significant mobility disability. Many of these veterans remain at home, disengaged from society and some losing hope. The three- to seven-day adventures are more than a hunting trip, they provide a sense of normalcy that the veterans thought they lost and provides new perspective on what their life can look like with a disability. 50 percent of the veterans participating in the AES Hunts for Heroes program have never experienced the hunt.

Hunts for Heroes is projected to provide more than 60 hunts in 2017.

“We’re all coming together to help the healing process for these warriors,” Holbrook said. “It’s amazing how many people love and respect our veterans. It’s very heartwarming and gratifying.”

The program is looking to help even more Arizona wounded veterans by accepting individual donations, corporate sponsorships and volunteers. Oftentimes those that volunteer for the program are veterans themselves, which creates an immediate sense of family for the wounded veterans and a quick bond on the expedition. Those interested may contact Arizona Elk Society Executive Director Steve Clark to provide hope to more local veterans through this extraordinary program at [email protected].

For those interested in nominating a veteran with a significant mobility disability, please visit https://www.arizonaelksociety.org/hunts-for-heroes to learn more about the program or email Dave Holbrook at [email protected]

About The Arizona Elk Society:

The Arizona Elk Society is committed to conserving and enhancing wildlife habitat in Arizona, protecting sound wildlife management and habitat through partnering with government agencies and other organizations and implementing special programs for youth education regarding conservation, hunting and outdoor activities. The Arizona Elk Society regularly informs the general public about issues concerning wildlife conservation, as well as scientific and biological wildlife and habitat management. Volunteer and sponsorship opportunities now available. Visit https://www.arizonaelksociety.org/