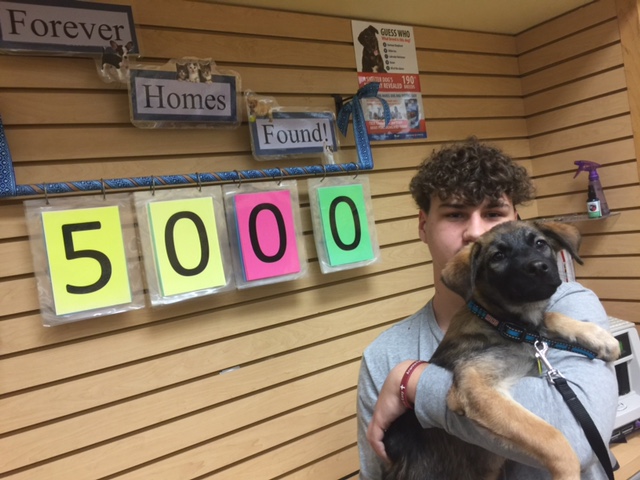 You can save more than money at Chandler Fashion Center – you can save a life.

The Arizona Animal Welfare League (AAWL) is celebrating 5,000 adoptions at its PetMatch Adoption Center. Since it took over a former pet store location in 2012, the shelter’s center has helped homeless animals find their furever families.

One-third of the adoptions (1,667) were cats and kittens with the remainder being puppies and dogs.

The no-kill animal shelter was hoping to break through the stigma surrounding animal stores that sourced dogs and cats from inhumane breeders and puppy mills. When The PetMatch Center store opened, it was able to spread the “adopt, don’t shop” message to a whole new demographic.

“It has been such an honor to come into this location and not only change the lives of 5,000 animals, but we are an example that this model can and will work,” said Judith Gardner, president and CEO of AAWL.

The PetMatch Center also sells toys, leashes and other pet accessories and the proceeds go toward AAWL. The profit from all purchases at the AAWL adoption center is used to provide loving care and medical services to other homeless animals. Up to 30 animals can be at the location at any given time.

The lucky 5,000th adoptee, named Zurg, found his forever home on the evening of Sunday, Dec. 4

“We’ve been looking for a rescue puppy for several weeks,” says his new family, which includes another AAWL dog and cat.

The puppy, now named Isaiah, was originally from JohnJay VanEs’ organization, “#LovePup.”  JohnJay, a well-known talent on 104.7 KissFM, and his wife, Blake, often rescue strays and other unwanted animals from the public.  AAWL has been working closely with their organization this year to help prepare dogs and puppies for adoption and providing an outlet for them to be adopted.

All pets offered for adoption have been spayed or neutered, microchipped and are current on all vaccinations.