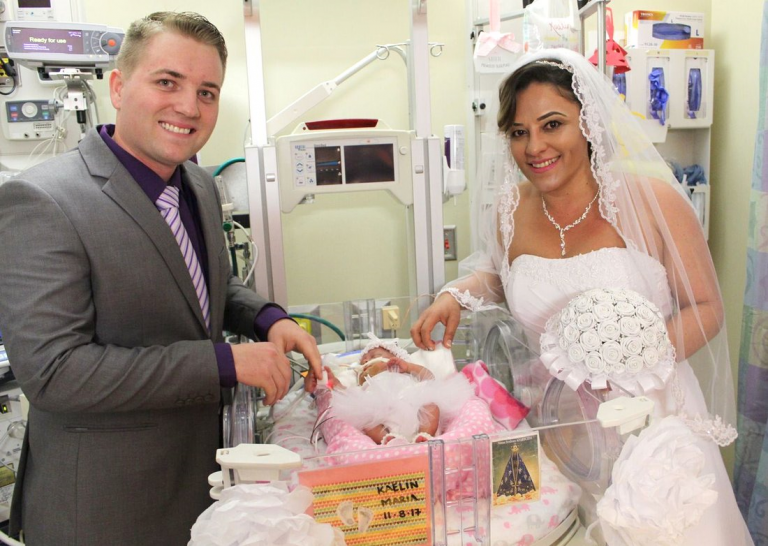 New parents Rubia Ferreira and Tyler Campbell said “I Do” with their premature daughter Kaelin Maria by their sides in a hospital ceremony at the University of Alabama at Birmingham.

It was an easy decision for the cute couple, who wanted their little girl to be the guest of honor as they recited their vows. 42-year-old Ferreira gave birth to Kaelin via emergency C-section at just 24 weeks, back on November 8, 2017. She had been diagnosed with HELLP syndrome, a rare condition that affects as many as 48,000 women each year in the US. Symptoms include abdominal pain, seizures, blurred vision and high blood pressure that can cause the mother’s organs to stop working properly. Doctors told the couple their darling baby would have to remain in the NICU for months as she recovered and grew stronger.

The parents have spent nearly every minute since at UAB’s Regional Neonatal Intensive Care Unit, where she has been closely monitored for five months since birth. While they were originally planning on a beachside ceremony in Okinawa, Japan—where they met when Campbell was stationed there with the Marines—they had to delay those festivities with the arrival of their daughter.

However, when Ferreira stumbled upon a video on Facebook that showed another couple exchanging vows in a hospital, she was inspired by the possibility.

“We knew we didn’t want to wait any longer to get married – we wanted to make sure our daughter would be there,” Campbell told UAB News. “We thought about how cool it would be to have our wedding in Kaelin’s room, but never expected that it could actually happen.”

The UAB team helped bring their special day to life.

“We had never had a wedding of this size and scale in the RNICU, but everyone was willing to do whatever it would take to make it a reality,” said Sandra Milstead, R.N., BSN, family nurse liaison in UAB’s Women and Infants Center. “So many people at UAB had formed relationships with Tyler and Rubia, and we all wanted to make sure that, although taking place in a hospital, this was the wedding of their dreams. That’s what they deserved.”

That meant everyone had to pitch in to make the wedding come together in two weeks, just in time for Valentine’s Day. UAB Arts in Medicine provided décor and a sewn bouquet for the bride, while UAB Catering pulled together the refreshments and wedding cake.

On Feb. 14, Ferreira was walked down the aisle by Kaelin’s neonatologist Waldemar Carlo, M.D., director of UAB’s Division of Neonatology. UAB Medicine Pastoral Care Director Malcolm Marler officiated the ceremony as nurses and staff from both UAB and the Ronald McDonald House Charities of Alabama watched as the union was sealed on the day of love.

It was a day they will cherish forever.

“UAB has helped save not only my life, but my daughter’s as well, and it meant the world to share this milestone with our new family here,” Ferreira told UAB News.

Although the family of three plans to return to Okinawa once a healthier Kaelin is discharged later this year, they will always remember their family at UAB.

“We want Kaelin to look back at pictures from our wedding and know about our experience as a family at UAB,” Campbell said to UAB News. “We hope she understands how much we cared for and loved her, and that it meant the world to us to have our wedding take place right there with her.”

Photo: University of Alabama at Birmingham