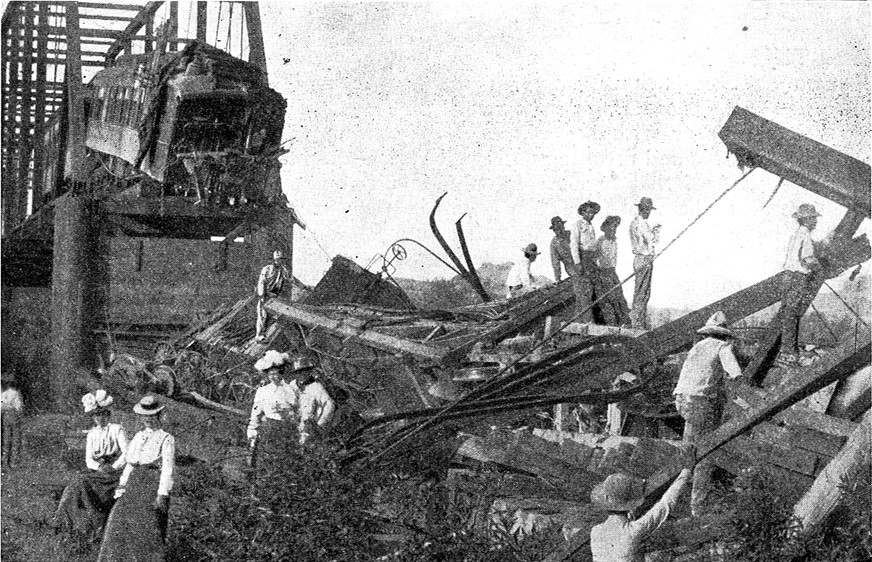 Originally published February 12, 2010 – Occasionally a community makes headlines for reasons it would otherwise prefer to avoid. Tempe took its turn in the national spotlight on a quiet October 29th evening in 1902. In a split second tranquility turned to a tragedy of such magnitude that Leslie’s Weekly a popular periodical of the time referred to the incident as “the most curious wreck in the history of railroad disasters.”

We began the story last week with a routine rail journey from Phoenix to Tucson via Tempe. It ended less than 30 minutes after it began when a pier supporting a central trestle spanning the Salt River collapsed suddenly.

In an instant the steam locomotive, tender and three freight cars tumbled in a twisted heap 20 feet to the dry riverbed below.

Behind them were a First Class Pullman and two coach cars. Fate blessed the nearly 40 passengers aboard that night.

In their drop from the span the freight cars tore away from those behind derailing the Pullman car thus preventing it from falling entirely from the precipice and stopping the two trailing coaches.

It was left dangling perilously on the brink of disaster.

When the dust cleared four cows had perished. None of the paying passengers suffered serious injury. Unfortunately a Pima Indian who had grabbed a ride atop one of the forward cars died tragically in the fall to the riverbed.

Trapped in the locomotive, fireman Frank Goodrich suffered serious injury ─ losing his leg to amputation several days later. He eventually returned to work as an engineer on local trains.

A disaster of this magnitude naturally attracted the attention of local residents.

David F. Myrick wrote about the incident in Railroads of Arizona Volume II. “Nearly 3,000 people came out the next day on foot or in private conveyances to view the site and speculate on what might have happened.’

Myrick proclaims the accident as the ultimate Kodak moment: “Probably more cameras were clicked to record that event than any other in local Arizona history up to that time.”

Luckily for historians many of those photographs have survived providing a remarkable record of the catastrophe. One we shared last week. Another accompanies this article.

Many of Tempe’s residents lived within walking distance of the accident ─ and immediately jumped to the rescue. Passengers were helped to the north end of the bridge. From there wagons transported them across the dry river bottom to Tempe from where they would ultimately complete their journey.

According to Leslie’s Weekly the twisted steel wreckage “…was removed by a gang of Mexicans.” The work was completed so swiftly that temporary repairs allowed the track to begin re-carrying trains in just one week.

The locomotive and tender were moved into Tempe along specially laid riverbed track. Both were able to return to service. “As for the three freight cars,” says Myrick, “they were ‘smashed up so badly that they had to be carried off in a basket.’”